Shueisha, one of Japan’s most popular publishers, established a new subsidiary called Shueisha Games on February 16, 2022, as they look to expand their business into the gaming industry.

One of Shueisha’s most notable works is Weekly Shonen Jump, the mega-popular manga anthology magazine that includes hit titles such as One Piece, Naruto, Bleach, just to name a few.

With the establishment of Shueisha Games, the company aims to collaborate with various creators such as manga artists, writers, novelists as well as many others to develop quality games. This is an effort to break down the walls between the publishing and gaming industries and bring them together.

Although the subsidiary company was only just recently announced, Shueisha Games already has multiple game titles that are currently in development, with some even being slated to release this year, as reported by Gematsu.

Among the titles that are currently in the works are “Captain Velvet Meteor: The Jump+ Dimension”, “The Tower of Children” and “ONI” (working title). However, what platforms these titles will be released on remains to be seen.

This is exciting news for manga readers and anime fans alike as with the creation of Shueisha Games, comes the possibility that many popular manga titles could be getting their own game adaptations in the future. The landscape for anime-based games could be shaken up as for the past several years, Bandai Namco has dominated this genre with titles such as the “Naruto: Ultimate Ninja Storms” franchise, “My Hero Academia Ultra Rumble” and “Dragon Ball FighterZ”.

For more details on this newly established gaming company, you can head to their official website.

Shueisha Games starts today!
This is a new space for us, but we're excited to bring the knowledge & experience of years of publishing some of the world's most famous manga to games!https://t.co/SKH0Ycwzjx pic.twitter.com/ij7joO0qn2 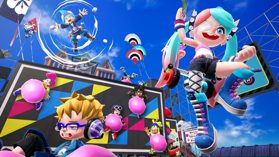