I continue to like the idea of a neck-based headset as a solid alternative to headphones for gaming at my desk or on the couch. They let me keep sound relatively to myself so I don’t bother anyone else in the house while also allowing me to keep my ears open to my surroundings. All this while not making me sacrifice the audio quality I’ve come to expect from soundbars, speakers, or headphones.

Good neck speakers don’t come cheap, however. Today I’m looking at the Hori 3D Surround Gaming Neckset, which comes in less than half as expensive as the $250 Sony SRS-NS7, which itself wasn't without its flaws. At just $100 (and often discounted even more than that) for the Hori Neckset, is there much of a sacrifice?

While the Sony neckset I previously reviewed felt like a fancy experience, the Hori is a lot more bare-bones and austere. Holding it, the Hori neckset feels a lot like a video game controller: the exterior is a hard, rigid plastic all around. The point where the two sides of the neckset come together behind your head is a slightly more flexible material, but it doesn’t feel like it’s designed to give very much and immediately springs back into its standard position. On both sides of that connection point is what appears to be a silicon sleeve that can be slid off to reveal where the slightly flexible bit connects to the actual speaker unit. This silicon sleeve is probably there to help prevent the neckset from sliding when it’s on your shoulders, and it does a good job of that, but also hides this rather unattractive connection point.

While worn, the left-hand side features a large mute button on the outside that feels perfectly located to be easily toggled with your left thumb. When muted, an orange light will illuminate on a pointed area right above that button that also houses the microphone. While it serves as a good indicator to tell you if the microphone is live if it’s not on your neck, that light is not visible while you’re wearing it which cuts the usability significantly. It’s not very bright either. 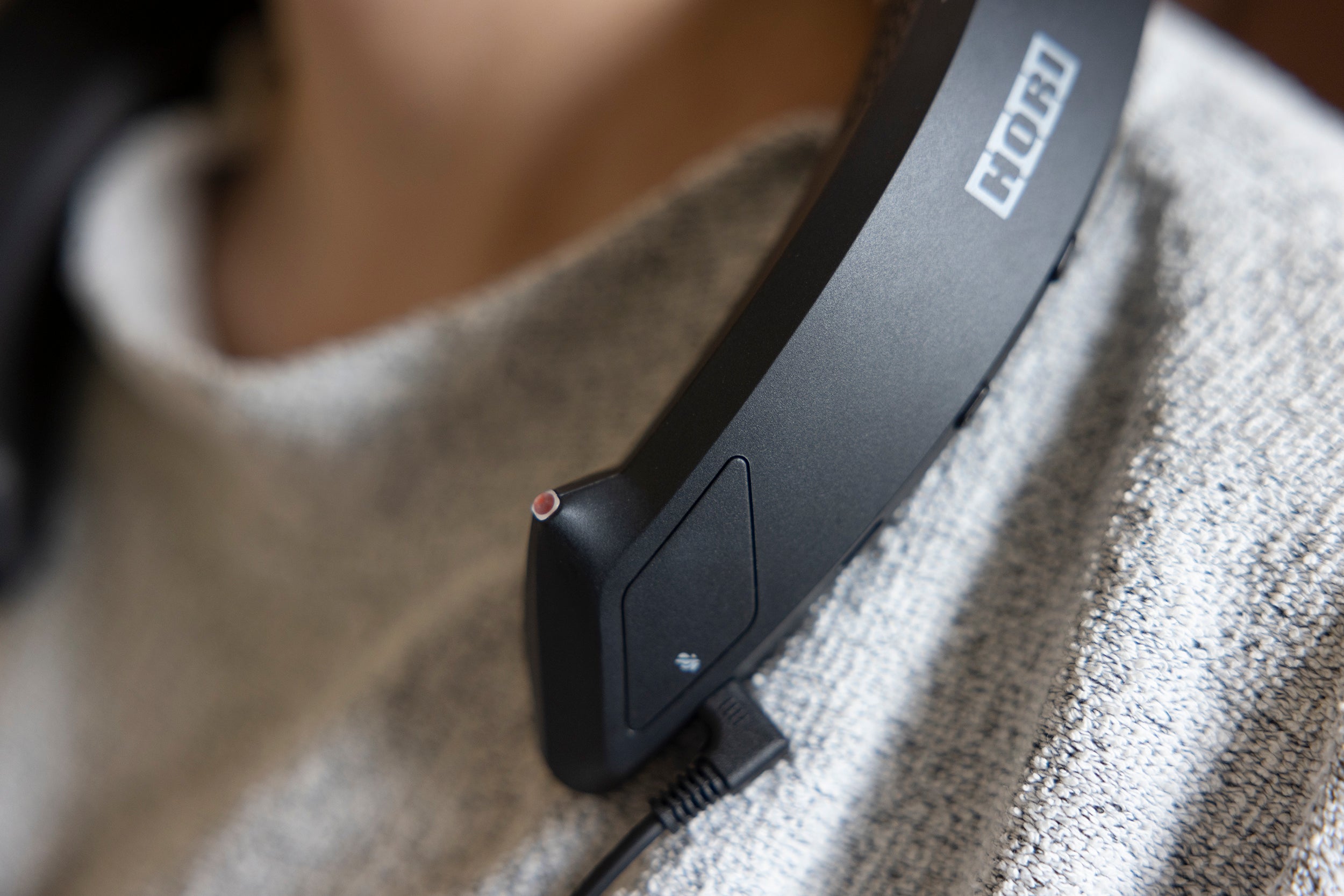 On the right side of the neckset is the volume rocker, which is a spring-tensioned unit that digitally controls the volume. This rocker can also be pressed like a typical button, but this doesn’t appear to do anything, and checking the user manual, that functionality isn’t mentioned.

From a design perspective, I find the Hori Neckset to be too angular. While yes, it does look more “aggressive” and perhaps more “gamer” than the Sony neckset, this is a hard plastic object that is sitting on my shoulders. I don’t particularly like hard, angular plastics pressing into me, so this design decision does not feel like one made for the sake of comfort.

The setup and usability of the Hori neckset might be its biggest benefit: this thing is dead simple to use. Anything that has a headphone jack is compatible with the Hori 3D Neckset. It acts like any wired headset and can connect to a console controller or the headphone jack of a computer. Once plugged in, press the power button and it’s instantly working. It can be manually turned off by holding the power button for three seconds. Additionally, if it’s not in use for 30 minutes, it will automatically power itself down. 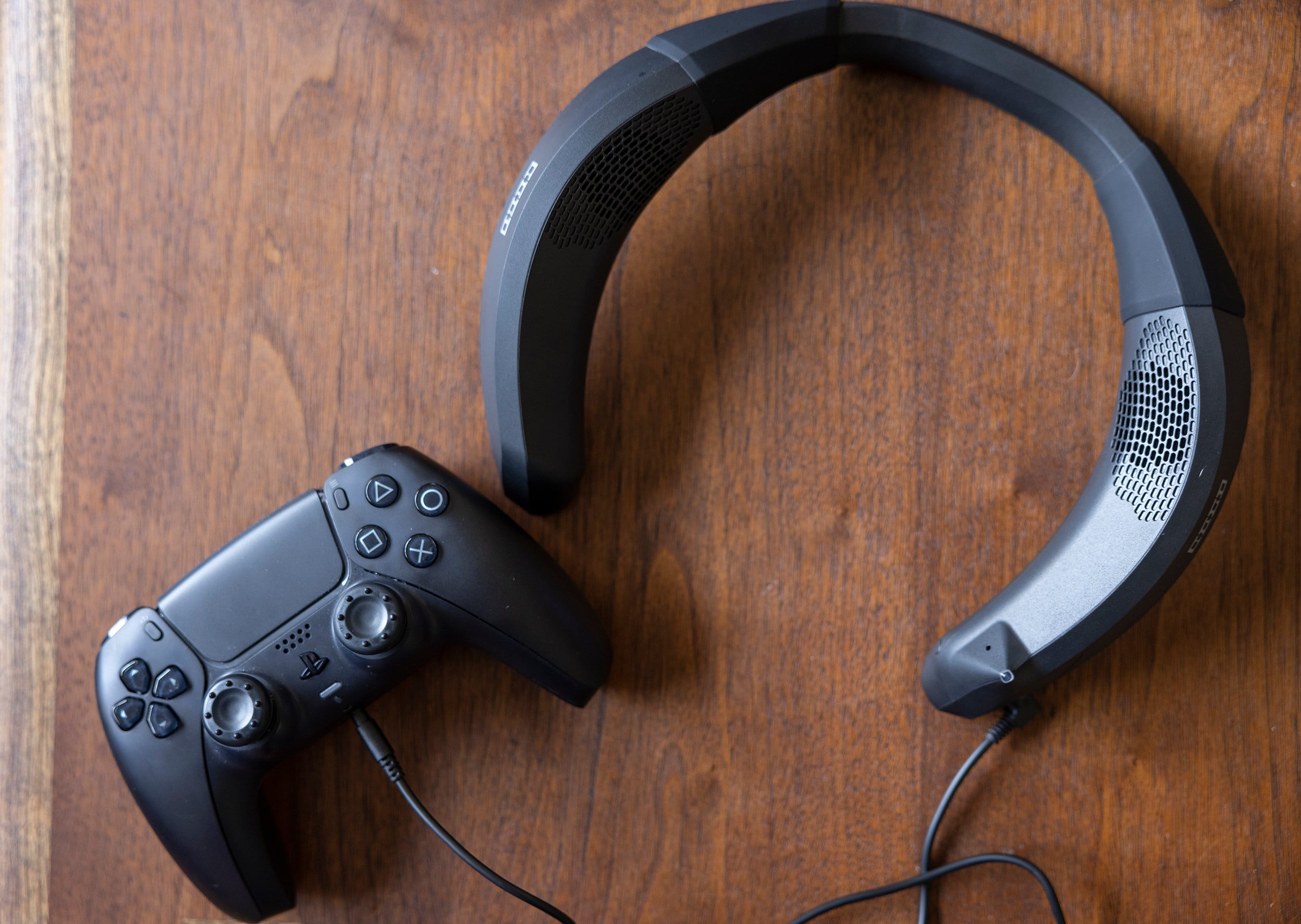 The headphone has two modes: bass boost and FPS mode. I’ll dig more into each during the audio section below, but they are easy to swap between and do sound distinctly different. That said, the headset doesn’t tell you which you’re currently using, so you might have to switch between them and settle on which sounds best to you in a particular use case.

The battery lasts 10 hours which, for a wired headset, isn’t particularly long: in 2022 I expect better than that even at the Hori’s price. Additionally, it doesn't have any fast charging mode, so once it’s dead, you have to wait three hours to get back to a full charge.

I’ll be straight with you: these do not sound good. I think Hori is trying really hard at this price, but the two drivers the company is working with are clearly lower quality. There is basically no low-end to audio, even in “bass boost” mode. Highs are rough, sharp, and unpleasant, and mids are weak. It’s a very unbalanced listening experience.

Between the two modes, I do prefer bass boost, but that’s only because FPS mode is truly awful. It manages to subtract even more low and mid frequencies, making audio quality very rough and unrefined. Basically, think of a mid to low-end laptop speaker and slap those on either side of your neck. I would rather have no sound than what I hear out of FPS mode.

Those two drivers also do a very bad job at giving me surround sound. While yes, I am “surrounded” by sound, the Hori headset isn’t able to give me any specific locations of where a sound is coming from other than vaguely left or vaguely right. If Hori was going for some kind of digital front and back, it didn’t come through to me. I found myself straight up lost when trying to track sound in shooters like Apex Legends and Destiny 2 because the Hori headset just was unable to give me any kind of precision in how it renders sound location.

Everything sounds steps below how it was intended to on the Hori 3D Neckset. If you appreciate audio to any degree, these are likely going to disappoint you.

The microphone on the Hori 3D Neckset is serviceable, but it’s not a good listening experience for the other end. My friend described my voice as though we were in a very large tiled bathroom and I was talking to him from the opposite side of it. I sounded echoey, far away, and my words were difficult to make out.

From my end, the headset did not do a great job metering the two audio sources of the video game I was playing and the chat party I was in. At any volume, it would get very muddled and unless I turned the game volume almost entirely down, it was difficult to hear what my friends were saying.

This is not a good audio device to use if you are in a party chat, for either you or your friends.

This neckset rides a fine line: it’s not particularly uncomfortable, but I don’t find myself wanting to wear it for long periods of time either. The aforementioned hard edges of the plastic build rest directly on my collarbone and it does contribute to some fatigue.

But more than that, I found the quality of the audio to be more of a hindrance. These just aren’t fun to use. The sharp, rough sound of the audio just really exhausted me. While I love listening to music on well-rounded speakers, listening to renditions of video game scores from Horizon: Forbidden West and Destiny 2: The Witch Queen (both of which are spectacular) was almost painful and irritating. For those who don’t like repetitive, rough sounds (like construction work or a really annoying bird), that kind of pitch is what you get out of the Hori, and it just doesn’t physically feel good to listen to.

The Hori 3D Surround Gaming Neckset is available from Hori for $119, and on Amazon currently marked down to $75. It comes in two versions, a white color scheme for PS5 and black for Xbox Series X/S. Aside from color, the headsets are identical and are compatible with either console or any other device with a 3.5mm audio jack.